The client is a software company that provides businesses with 1-800 numbers, allowing them to better track their return on ad spend.
‍
From 2017 to 2018 business was going well: website traffic, revenues and profits were growing steadily month over month. The company had launched two business divisions, each achieving success in their markets, and the company was gaining market share in a competitive space.
‍
In early 2019 – without any warning – organic website traffic, which accounts for a significant portion of the company’s new revenue, started to decline.
‍
From January through October 2019, this slow and steady decrease persisted. By November 2019 organic traffic had dipped dangerously low, materially impacting their profitability and prompting them to seek a solution. 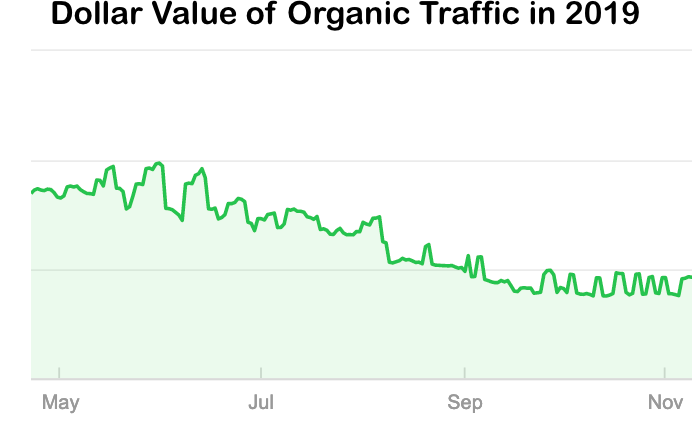 In November 2019 their VP of Marketing found Bestcoast on LinkedIn, booked an intro call, and explained their situation. She relayed her concerns regarding their sliding performance in organic search and her confusion over how to fix it.
‍
She also expressed the company’s hesitation to spend money on marketing or commit to anything long term without seeing short term results. Profits had suffered as a result of the decline and their budget was tight – they needed to see signs of improvement quickly.

We’d helped companies in this exact situation many times; we believed we could get the company not only out of their recent dip, but above previous highs from 2 years ago. We were also confident we could show them improvement within 2-3 months.

On our next call together we presented our in-depth review of their organic traffic situation, outlining four key areas where could show measurable improvement by months 2-3, and dramatic impact by months 4-6. Here are the four areas of weakness we identified:

We immediately began the process of building high quality links. Link building typically takes 2-3 months to have a notable impact, so we needed to start ASAP. We built 10 links per month to high Domain Authority publications (DA 70 and higher) with significant traffic in business and tech verticals, where we could create meaningful impact in the shortest time frame possible. We focused on directing those links to the pages where we saw the highest potential for rankings (and traffic) improvement.

By the end of December – just one month into the campaign – search impressions, which had been dropping for 10 consecutive months, started to increase.
‍
Search impressions are the total # of times a website appears on someone’s screen in search results. It is generally a leading indicator of improvement in organic traffic and revenues, so it’s one of the first things we look for to see signs that our links are having an impact.
‍
By early 2020, what began as a slow turnaround in search impressions had snowballed into a dramatic increase – Kall 8’s search impressions not only regained ground they lost in the dip, but reached new all-time highs.

The number of keywords ranked in the top 100, a measure of a website’s ability to capture “long tail” searches, also began to show signs of improvement.
‍
The increase was slow at first, but started to ramp up dramatically as the November and December links took effect in January and February.

The improvement in these two metrics indicated that our links were clearly driving growth.  As a result, the company was becoming far more visible on Google for a range of searches related to their value proposition.

While higher keyword rankings and search impressions are a great sign, they are merely the foundation for what comes next: an increase in traffic and revenues from organic search.
‍
By early January 2020 we started to see signs of organic search revenue starting to tick up, ending a downward slide that had lasted nearly a year.
‍
By April 2020, six months into the campaign, they had not only rebounded, but regained all ground lost over the prior 12 months.

With Bestcoast, our client didn’t just restore profits lost in the dip – they saw the highest traffic and profits from organic search since they opened for business.

‍"We experienced a major dip in organic traffic last year that seriously impacted our business. It had us feeling very concerned.
‍
Bestcoast helped us recover from that dip and got us back on track even better than before – in 6 months they grew our organic traffic by 56%. This allowed us to not just survive the Covid era but even thrive at a time when our competitors are slowing down.
‍
We’re delighted with the results from working with Bestcoast — it’s been a huge bright spot for our business. It’s a no brainer to keep working with them. I can’t recommend Bestcoast enough!”
‍
-Megan A, VP of Marketing

How to create killer content that grows your revenue substantially

Read story
Thank you! Your submission has been received!
Oops! Something went wrong while submitting the form.